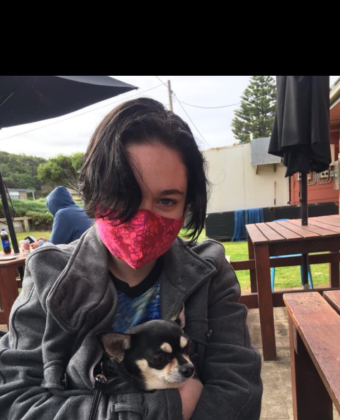 From a young age I was interested in creative mediums, often writing stories, making short films, and drawing characters. Currently I have a particular focus in film, stage plays, and music, but often dabble in other types of visual and written media.

In 2021 I participated in SRC Victoria's Hey project, creating three pieces of work based around LGBTQ identities, 'Mirrored in me' a visual art work depicting a trans individual reflecting on their past and future, 'Believe me I love you' a poem about the experience of growing up queer, and 'Bacon makes us human' an audio piece on asexuality and how it can affect the way a person views the world. I find that my works are often greatly influenced by my own life experience, being that I am both disabled and LGBTQ. As such, my characters and stories often have great amounts of representation, particularly in these areas.

Taking inspiration from the works of Emily Dickinson, Shakespeare, and Jane Austen, I have spent most of my time writing poems, short stories, and plays. I created a few works that have yet to be published, and am currently working on a few plays with the support of Lab Kelpie, an Australian New Writing Theatre Company. These works involving many artistic mediums such as dance, music, lighting, and stage acting. I am also working in collaboration with another artist on a comic to be posted on Webtoon, with a story line featuring disabled, LGBTQ, polyamorous, and POC characters.

In the future I hope to be able to broaden my areas of interest, and get experience, not just in the art of writing, but in the way it is produced, published and preformed. I hope to make new connections, like Lab Kelpie, that can help me down a path of turning this passion into a career.