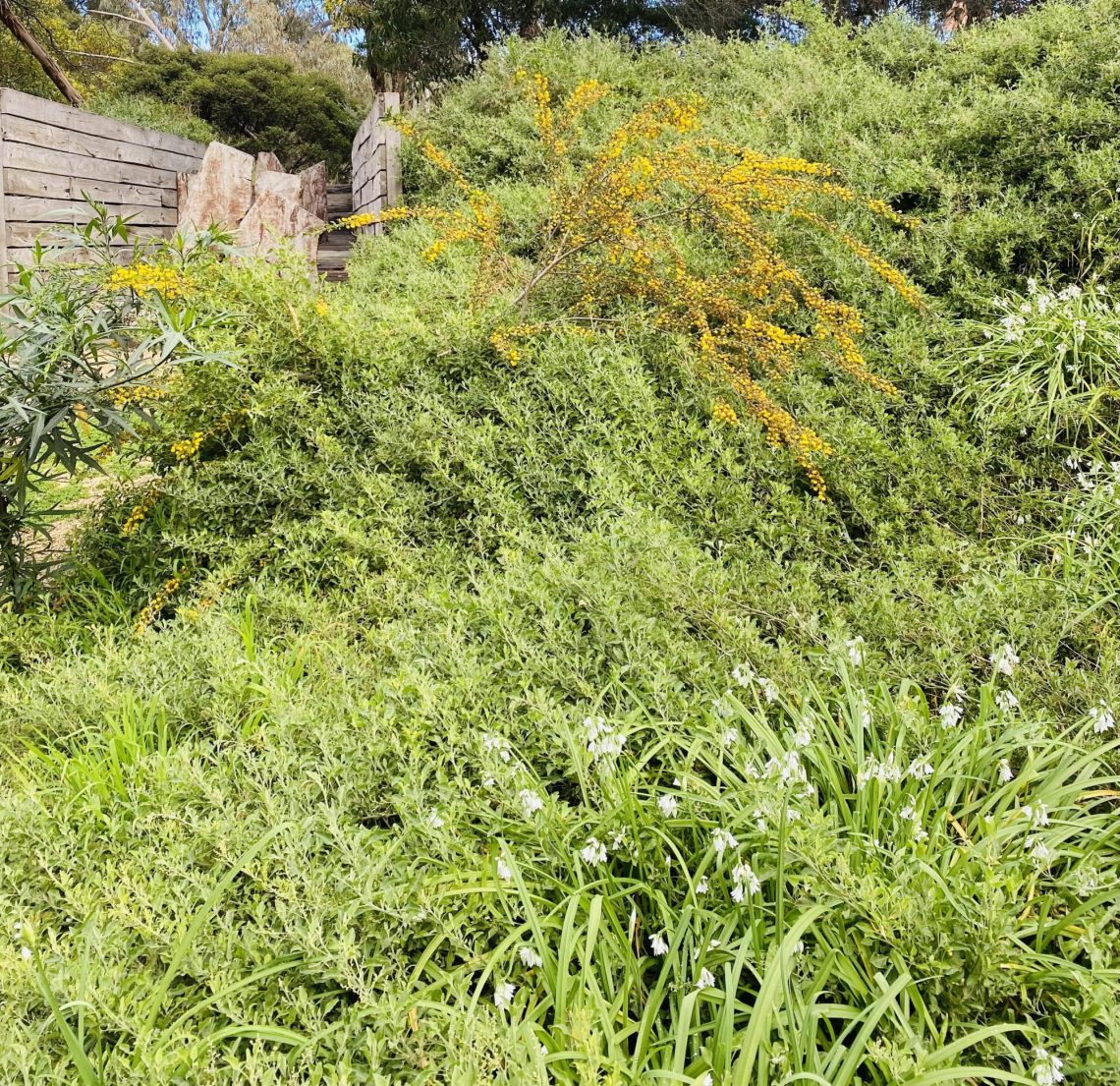 Flowers of Birrarung and Herring Island by Tristen Harwood

considerations emergent on the first and second occasions of Regional Assembly

first acknowledge that the event of this text, an unfinished recording takes place and is made possible by ground, air, water, the unceded territory, the ground, water, sky Country of the Woiwurrung of the Kulin Nations. This Country is instilled with and instils a long tradition of Wurundjeri theory, practice, and presence. The five nations within the Kulin alliance negotiate and continue to practice relations with each other across their territories, and to share the land with regard for each other’s jurisdiction, governance, and sovereignty. Each of these nations exist in deep reciprocal relations with the land, waterways, and skies, and the plant and animal nations within their territories, and all the metaphysical and material things that connect them to this place of meaning and belonging as kin.

The season is Guling,[1] it begins in motion, exchange, it ends with switch, it ends with Porneet, as it begins. You know it’s Guling not for a time marked by Gregorian calendar but what you see, what you see is yellow spectral bloom of muyun (silver wattle (Acacia dealbata)) and them popping attendant orchids, small flowers, yellow, yellow, purple, gold, white too. This is recorded by the Kulin seasonal calendar.[2] The lit up golden wattle laces Birrarung’s vestigial banks. Breathe Misty River, yellow fuzz blooms are your stars in no night sky.

And "I go on with these flower names not only because I enjoy making lists—but also to remind you, the reader, how words supersede and displace the reality of an object sensed in space and time.”[3]

Breathe, pollen, honey, abbreviating, a bee’s death is a paean to embodied resistance. Last week some dauntless bee stung me on my temple, a missive epistle earful or nothing at all.

The river is a short walk, south of my apartment.[4] Light pulse, during our online meetings (Regional Assembly) I cannot see the south but submerged fibre can.

Which is to say no matter where we gather, we are always indebted to the places we inhabit and the ‘shadow places,’ ‘downstream communities,’ that maintain our places (resource extraction, pollution, exploitative labour, etc).[5] There is no escaping debt, or to quote Jack Halberstam, ‘debt is sometimes a history of giving, at other times a history of taking, at all times a history of capitalism and given that debt also signals a promise of ownership but never delivers on that promise, we have to understand that debt is something that cannot be paid off.” And if then we live with debt, can debt become a principle of elaboration?[6]’

And in taking up this principal of elaboration, we might consider Regional Assembly as a kind of scaffold rather than the central structure, a provisional support sitting alongside where thoughts can be held, moving towards and against the accumulation of knowledge.

There is a complex of factors that brought us together, compatibility and difference, personal relationships, our geographic, cultural, vocational positions, and the broader sociocultural milieus in which we work. Regional Assembly takes place at the threshold of exactly where we are not, not across difference but desiring such modalities.

But also the scaffold wants to fall away from support.

Perhaps it describes by desiring, which is the normal method of description.[7]

To be true what Regional Assembly is and what it will become I don’t know. Karen Mills calls her small eloquent paintings, ‘abstract remembered landscapes,’ as she puts it, she studies the shapes, lines, colours – which is to say anything but space – around things like a tree, branch, flower. This is something like the approach I adopt in documenting Regional Assembly, not seeking to fix diffuse moments, words, gesture, small things in imagined coherence but to perambulate, tracing at edges of things, which remain wayward.

Memory makes something out of fragments. Out of the break with events and time it finds form in brokenness, it refuses order as the distinction between utterance and poetry, chatter and knowledge, pain and truth, here and there.[8] The poetry of Ali Cobby Eckermann at times moves through a topography of violence, situating the body at the exact location that the call to order is refused. At the first meeting of the Regional Assembly Cobby Eckermann read the poem First Time (I met my Grandmother) (2009).

So it is better to speak

we were never meant to survive.[10]

Ali Cobby Eckermann is a Stolen Generations survivor. Her mother was born on red dirt country, Country. She didn’t find her mother until she was thirty-four years old. First Time (I met my Grandmother) with the dedication “for Rosina,” begins:

Sit down in the dirt and brush away the flies

Sit down in the dirt and avoid the many eyes

This passage sets forth the self at the site of its erasure, not finding but searching for it on an obstinate journey of return to the sacred. Being ‘in the dirt’ is the tireless marker of life and death, imagine a tree growing up from ‘in the dirt’ or a dead body buried ‘in the dirt.’

In the dirt because, as Audre Lorde writes “poetry is not a luxury. . . It forms the quality of the light”—here the light is cherished, held—"within which we predicate our hopes and dreams toward survival and change, first made into language. . .” Language is then made in the earth, anticipating and anticipated by the ground, which it nonsensically supersedes.

The body in the poem – the poet herself – the body of the poem we know is living. But moves into and out of the text with uncertainty. Flies swarm her, she brushes them away. She is outside, outside of domesticity. Is this the foundation of a home, homeland: the flies must be bush flies, small grey things with big brown eyes. Unlike other types of flies, bush fly is not attracted to blood or carrion, bush fly is attracted to sweat, saliva, tears, to the fleshy living body.

Flies hover in subjective space. In these first two lines the ‘I’ finds its enunciation only in the literal ‘eye,’ which avoids contact­—a moving suspension. Movement away from going nowhere is the body’s apprehension of concealment and the revelation of identification.

I never done no wrong to you, so why you look at me?

But if you gotta check me out, well go ahead – feel free

The ‘I’ is sounded in refusal, “never done no wrong to you,” it is both evidence and witness of the wrongdoing.

The transitive verbs ‘have’ and ‘do’ are absent from the line that announce ‘I’ in Aboriginal English. “Absence is the admired presence of each poem.”[11] Aboriginal English sounds the lived, ontic, social reality of an Indigenous lifeworld, a different way of articulating being that refuses the metaphysics of possession-dispossession.

Aboriginal English does not toil over the misery of its own existence—Cobby Eckermann says she loves driving around Country, she takes a voice recorder and goes for drives—Aboriginal English is our necessary disorientation, recording the place where we’re on our way to that we’re already making.

And now yous’ mob you make me wait, so I just sit and sit

Here and throughout the poem, seeming useless English is used, it dwells, waits in the aporia of Stolen Life, on Stolen Land as ontological conundrum.

“And when they were taken away they were put right outta sight for good.”[12]

“Outta sight for good,” Stolen Life that returns in flesh after suffering social death is a living ghost that more than eyes gotta train to see.

I feel that magic thing you do, you crawl beneath my skin

To read the story of my Soul, to find out where I been…

“We got a shock when we seen you, you got your Nana’s face

Absence planted—ma, grandma, magic—beneath the skin in phantom flesh is no home for Christian Soul, which cannot comprehend the dirt. Whose or what Soul then, lost Soul, is the Soul the body must acquire to become “human.” The Soul is not lost, it is inscribed here as loss, it’s legible only as where the body been gone, “outta sight for good.”

The Soul acts as what the poem encounters as the impossibility of repairing the irreparable.

“Desire through language is always too late. And so we glimpse at its failure instead . . . perhaps we might remember that there never was a blank page, only an imaginative projection.”[13]

I understand the feelings now, tears push behind my eyes
I’ll sit on this soil anytime, and brush away the flies

I’ll dance with mob on this red Land, munda wiru place
I’ll dance away them half caste lies ’cos I got my Nana’s face!

She gets up, walks, dances, leaves footprints, finds the words, so the place. What impression does the dirt make, together the wind, but cannot hold, of the poet, the poem, the windswept footprint gone and not the footprint is the dirt’s memory.

Windswept, curl, in the wind, wind is passing reminder that the space around things is never empty.

Karen Mills’ abstract landscapes trace memory as the body travelling through landscapes, making sense of the land through quiet collection. She stops in certain places as she travels, studies them. And she makes these small serial paintings in her domestic studio, keeping everything within the canvas in arms reach, perhaps countering dislocation or things getting out of hand.

Mills likes to paint with grey, that is grey the colour of many textured clay in stream, beneath feet. One of the reasons she loves this colour, she says, is because she used to have a British Blue studio cat.

Cat memory, clay cracks, memory fractures, Mills says of the cracks (in her paintings) that somewhere they are her own self, “falling into gaps.”

Cobby Eckermann loves going for drives, and if it can be said Mills traces movement through landscape, Leecee Carmichael literally traces the movement of her ancestor’s hands in her woven baskets. In their seeming emptiness her woven baskets hold Ancestral wisdom, spirit, praxis, place.

The woven basket is a web, spider weaving the world, these are world making practices, poem, painting, basket.

Afterwards – considerations emergent on the first and second occasion of Regional Assembly,

Mediated dislocation, location, body, disembodied, the gaps between here and here, places and the bodies obscured by the screen. To start with to enumerate, to try to name things is precisely the impossibility of not leaving anything out.

To start with what is left out.

[1] It’s said they named muyan Barak’s Wattle, because when he died the wattles were in full golden bloom. Yellow box flowered, the murrnong was budding and as the temperature rose people travelled to lower ground where they could catch ducks, other birds, collect their eggs. “William Barak – (1824-1903)” https://www.wurundjeri.com.au/...

[2] Guling or orchid season is one of the seven seasons of the eastern Kulin seasonal calendar. Overlaying these seven seasons are flood season, likely to occur approximately every twenty-eight years, and fire season, occurring on average every seven seasons, further information can be found at: https://museumsvictoria.com.au...

[4] The rented apartment in which I live and work, illegitimately occupies space on Woiwurrung peoples’ territory, immediately to my south is Boon Wurrung, to my north-east is Taungurong, north-west Dja Dja wurrung, and to my west Wathaurong peoples’ territories. The boundaries between these Nations are not so much borders as they storied threads of language, culture, social and political practices, ecology, which simultaneously demarcate points of difference and coming-together. There is no empty space.

[7] Fragments of sentences in Lisa Robertson’s expressive essay “Doubt and the History of Scaffolding” in Occasional Work and Seven Walks from the Office for Soft Architecture, 2003.

[10] The final three lines of Audre Lorde’s poem A Litany for Survival from The Black Unicorn, 1978.

[13] Aodhan Madden, “Thinking the Soul beyond Property on Susan Howe’s Souls of the Labadie Tract” in Index Journal No. 3 “Monument” editor Tristen Harwood, 2021.