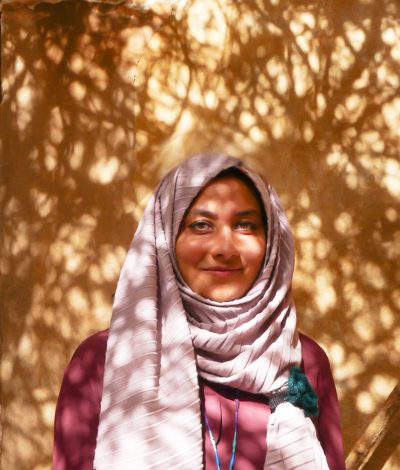 Lives and works from Srinagar, Kashmir.

Born and brought up in Kashmir’s Srinagar, Uzma Falak deploys mediums of film, sound, essay, memoir and reportage, poetry, subversive embroidery practice, ethnography and auto-ethnography, and found materials as forms of inquiries. Her work has appeared in The Baffler Magazine, Al Jazeera English, The Caravan, Himal Southasian, The Economic and Political Weekly, New Internationalist, Jadaliyya including anthologies and edited volumes like Of Occupation and Resistance: Writings from Kashmir, Cups of Nunchai and Can You Hear Kashmiri Women Speak? among others. In 2017, she won an Honourable Mention in the Society for Humanistic Anthropology’s Ethnographic Poetry Award. Her poetry has appeared in Adi Magazine, Warscapes, Anthropology and Humanism, Himalaya Journal, The Electronic Intifada, The Palestinian Chronicle, Gossamer: An Anthology of Contemporary World Poetry, Fault Lines of History and others. She was also an invited artist-scholar at the 2018 Warwick Tate Exchange held at the Tate Modern.

Her documentary film Till Then The Roads Carry Her exploring Kashmir women’s lifeworlds and repertories of resistance seeks to disrupt official histories and exoticised iconographies. It has been screened at the Art Gallery of Guelph (Ontario), 2nd Annual Memory Studies Association Conference (University of Copenhagen), The 24th European Conference on South Asian Studies (University of Warsaw), Karlstorkino (Heidelberg), Tate Modern (London), CineDiaspora Film Festival (New York), 12th IAWRT Asian Women's Film Festival (New Delhi) and others. She is also part of a cohort coming together for Capture All: A Sonic Investigation — a collaboration of Australia Council for the Arts with Liquid Architecture and Sarai, focused on exploring sound/listening as resources of power, capture, and extraction. Currently, she is the DAAD Doctoral Fellow (Anthropology) at University of Heidelberg where her work focusses on Kashmir women’s liberatory auditory practices as sites of alternate spatialities, temporalities and modalities of being.